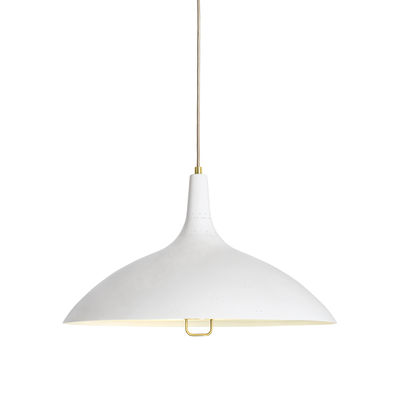 Gubi Pendant White Metal. Dimensions: Ø 46 x H 26 cm – Ceiling rose: Ø 11 x H 11 cm – Cable: L 380 cm max.. The 1965 pendant was designed by Finnish designer Paavo Tynell in 1947. A great pioneer of Finnish lighting, Paavo Tynell (1890-1973) is fondly known as “the man who lit up Finland”. Like many of his best-known creations, the 1965 pendant was made for the House of Finland in New York, one of the most ambitious projects ever undertaken to promote Finnish design in the 1950s. Known for their delicacy and softness, Tynell’s creations are derived from a traditional aesthetic mixed with a modern sensibility. A master craftsman, Tynell became famous for his use of perforated polished brass. The 1965 pendant illustrates Tynell’s taste for perforated brass. The lampshade is decorated with small holes forming delicate triangular patterns. These perforations let the light filter through, producing a poetic light effect. Inside the lampshade, the frosted glass diffuser prevents glare. The brass details that adorn the lamp add real sophistication to the whole thing. Today, Paavo Tynell’s lamps are highly sought after by collectors around the world, and prices for his original pieces have recently soared at auction. Reissue of the 1947 model, designed by Paavo Tynell (1890-1973) – Perforated patterns on the lampshade – Bulbs (not included): 3 x 46W Halogen E27 – Ceiling rose included – Supplied with EU plug: EU to UK plug adapter included > Flash sale: special price for a limited time only.
BUY NOW at Made in Design UK*