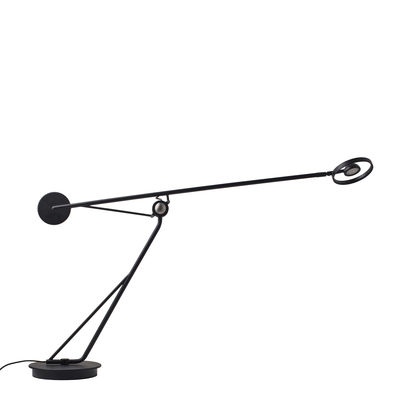 DCW éditions Table lamp Black Metal. Dimensions: Base: Ø 16.6 cm – Small arm: L 38.5 cm – Large arm: L 100 cm – Diffuser: Ø 11.7 cm. With Aaro, the magician, Simon Schmitz, makes his lights levitate… The starting point of the lamp from the young German designer is an act: the desire to create as fluid a movement as possible. This immediately guided him towards a sphere shaped joint, which leaves room for infinite directions. The sphere is the central element of the lamp, it connects the two arms to one another. A sphere which has neither left nor right, nor up or down. As the central element of the lamp, this sphere allows all the rest to gravitate around it. Geometry, balance, friction: it all rests on the sphere. It all points to it. Aaro is an object which seems to float in the air, gravitating around its central sphere, like planets in orbit. The Aaro wall light has a clean assembly of elementary forms: sphere, discs and tubes. Its long arm ends on one side with a diffuser which contains an LED source, and on the other with a steel disc serving as a counterweight. Like a mobile, this large light sculpture moves fluidly in space to direct the light accurately. The long, tilting arm can rotate through 365°. Its hi-tech joint holds the arm perfectly stable in any position. It has a movable diffuser, The lamp casts a powerful, non-dazzling LED light. The designer, Simon Schmitz: “For me a light is a sculpture. I use the light as a material.” Articulated and mobile arms (sphere-shaped central joint): fluid movement vertically and horizontally – Adjustable light: – Integrated LED source: 2700K – 3 W – CL I – 110/240 V – IP20 – Switch on the cable – Comes with Type A, C and G plugs
BUY NOW at Made in Design UK*